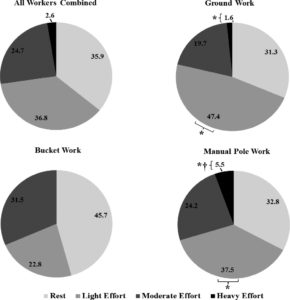 We assessed the physical demands associated with electrical utilities work in North America and how they influence the level of thermal and cardiovascular strain experienced.

Finally, mean and peak core temperatures and mean heart rate responses increased from the first to the second half of the work shift; however, no differences in the proportion of the work spent at the different intensity classifications were observed. We show that Manual Pole Work is associated with greater levels of physical effort compared to Ground or Bucket Work. Moreover, we suggest that the proportion of time spent performing work classified as heavy physical exertion is related to the level of thermal and cardiovascular strain experienced and that workers may not be employing self-pacing as a strategy to manage their level of physiological strain.