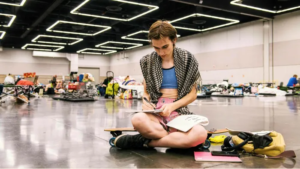 The future of work is already here and it is seriously hot. The deadly heatwave that scorched parts of North America last week is a wake-up call for workers and bosses alike.

Late on Monday afternoon last week, Amazon put out some news on Twitter that you do not always hear from a global retail colossus. Part of its downtown Seattle headquarters, it said, was operating as an official city “cooling site” for “residents in need of a place to stay safe from the excessive heat”. This was just one of dozens of cooling centres authorities hurriedly earmarked across the city as a mind-boggling heatwave engulfed the Pacific Northwest, a region better known for cool and drizzle.

In Canada, where recorded temperatures had never passed 45C, the mercury soared to a Middle East-like 49.6C in the British Columbia village of Lytton, just before a wildfire forced residents to evacuate.

“Words cannot describe this historic event,” tweeted environment department meteorologists in Canada’s west, where authorities fear the heat could be linked to hundreds of sudden deaths. The UN’s World Meteorological Organization said bleakly: “So many records have been broken that it is difficult to keep track.” Amazon was well-placed to help.

“There was a slow but steady stream of people” to its cooling site, a spokesman told me later in the week. But the company also sent sweltering warehouse workers home with pay on Monday afternoon, and it was not alone. Throughout the region, businesses shut down early and workers walked off the job. In Oregon, a farmworker died while working in the blistering heat.

You might expect scenes like these in countries such as India, which could soon become one of the first places in the world with heatwaves capable of killing a healthy person resting in the shade, McKinsey reported last year. But it has been a different story for workers and their bosses in places such as North America, until now.

“I think this week’s heatwave was a wake-up call for many western countries,” says Andreas Flouris, a global expert on heat stress in the workplace who runs a research laboratory in Greece. As a warming climate exacerbates the odds of workers suffering heat stress, he is at the forefront of efforts to bring in new laws and standards to combat the problem.

At the moment, many guidelines on when it’s too hot to work are rarely enforced or too weak to ensure workers are protected. Flouris says this is starting to change. Qatar adopted a series of new heat working rules in May after Flouris’ lab was commissioned to study manual workers in the Gulf State, which has been criticised for its treatment of migrant workers building stadiums for next year’s football World Cup.

The new measures mean the times when outdoor summertime working is banned have been extended. And all work must end once the wet-bulb globe temperature, a function of both air temperature and relative humidity, exceeds 32.1C. Workers have to have annual health checks and employers have to draw up risk assessments that are critical for understanding heat stress problems that Flouris says are easy to overlook.

“One size doesn’t fit all,” he says, explaining he uses tiny monitoring devices the size of a pill that workers swallow so he can measure their core body temperatures. In one restaurant, a waiter can have a normal temperature all day while a chef in the same building can have “extreme hyperthermic levels”.

Greece is piloting similar measures he hopes will go into effect next year and momentum is gathering elsewhere. The trick is to find a balance between protecting workers and keeping businesses open, says Flouris. I suspect a lot more attention will be paid to these rules after this week. The striking thing about watching reports of the Pacific Northwest heatwave roll in was how chillingly familiar it felt.

One Seattle doctor told the Seattle Times the number of people pouring into hospital with heat stroke and other heat-related woes was similar to what he saw at the start of the Covid-19 pandemic. Climate change means last week’s disaster will by no means be the last of its kind. As Flouris says, “this is going to be something that’s going to be happening a lot more often in the years to come”.

> Go back to News page