19 Jan A low-protein, high-carbohydrate diet stimulates thermogenesis in the brown adipose tissue of rats via ATF-2

Posted at 08:30h in Publications by Anr3FLoR 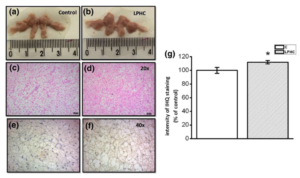 The aim of this study was to evaluate thermogenesis in the interscapular brown adipose tissue (IBAT) of rats submitted to low-protein, high-carbohydrate (LPHC) diet and the involvement of adrenergic stimulation in this process. Male rats (~100 g) were submitted to LPHC (6%-protein; 74%-carbohydrate) or control (C; 17%-protein; 63%-carbohydrate) isocaloric diets for 15 days. The IBAT temperature was evaluated in the rats before and after the administration of noradrenaline (NA) (20 µg 100 g b w(-1) min(-1)). The expression levels of uncoupling protein 1 (UCP1) and other proteins involved in the regulation of UCP1 expression were determined by Western blot (Student’s t test, P ≤ 0.05). The LPHC diet promoted a 1.1 °C increase in the basal temperature of IBAT when compared with the basal temperature in the IBAT of the C group. NA administration promoted a 0.3 °C increase in basal temperature in the IBAT of the C rats and a 0.5 °C increase in the IBAT of the LPHC group. The level of UCP1 increased 60% in the IBAT of LPHC-fed rats, and among the proteins involved in its expression, such as β3-AR and α1-AR, there was a 40% increase in the levels of p38-MAPK and a 30% decrease in CREB when compared to the C rats. The higher sympathetic flux to IBAT, which is a consequence of the administration of the LPHC diet to rats, activates thermogenesis and increases the expression of UCP1 in the tissue. Our results suggest that the increase in UCP1 content may occur via p38 MAPK and ATF2.