04 Jun Effects of aging on performance during the marathon des Sables: focus on athletes aged 53-80 years

Posted at 12:44h in Publications by Anr3FLoR 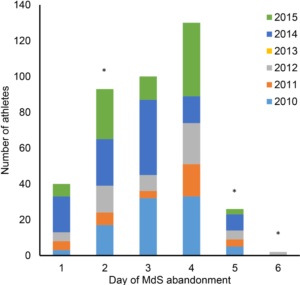 The aim of this study was to investigate the impact of aging and sex on athletic performance during the 7-day Marathon des Sables (MdS) in the Sahara Desert. Anonymous data for age, sex, and average running speed (km/h) for all the athletes who registered in the MdS during the period 2000-2015 were retrieved from the official website of the race and other endurance websites.