Posted at 13:05h in Publications by Anr3FLoR 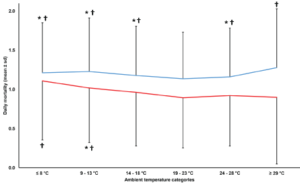 Methods: All-cause mortality data covering the period 2004-2014 were retrieved from the Health Monitoring Unit of the Cypriot Ministry of Health. Midnight (00:00) temperature data from weather stations across the island of Cyprus covering the same time period were collected from www.wunderground.com. Night-time temperatures were categorized into six 5-degree Celsius categories (≤ 8 ℃, 9-13 ℃, 14-18 ℃, 19-23 ℃, 24-28 ℃, and ≥ 29 ℃). The 19-23 ℃ category was defined as thermoneutral zone.

Results: A total of 43,107 elderly individuals died during the monitored period and the most prevalent cause of death was “diseases of the circulatory system” (41.5%; p < 0.001). Mortality due to diseases of the circulatory system was significantly reduced when night-time temperature was at the thermoneutral zone during the previous night (p < 0.05). The prevalence of deaths due to circulatory causes was higher for females compared to males (p < 0.001) (Cohen’s d = 0.34). Furthermore, there was higher prevalence of deaths during extreme night time temperatures compared with thermoneutral zone (0.24 ≥ Cohen’s d ≤ 1.01).

Conclusion: Mortality due to circulatory causes, the most prevalent cause of death in Cyprus, is increased when night-time temperature is above or below the thermoneutral zone.