Posted at 10:25h in Publications by Anr3FLoR 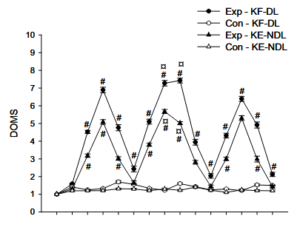 Purpose: We examined effects of a three-game, 1-week microcycle (G1, G2, G3) on recovery of performance and inflammatory responses in professional male footballers.

Methods: Players were randomized into an experimental (EXP; N = 20) and a control group (CON; N = 20). Blood was drawn and repeated sprint ability (RSA), muscle soreness and knee range of motion (KJRM) were determined pre- and post-games and during recovery.

Conclusion: In summary, post-game performance recovery and inflammatory adaptations in response to a three-game weekly microcycle displayed a different response pattern, with strong indications of a largest physiological stress and fatigue after the middle game that was preceded by only a 3-day recovery.