Posted at 14:52h in Publications by Anr3FLoR 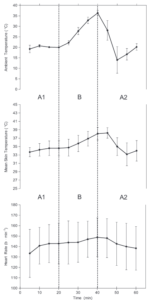 The modulation of sub-maximal voluntary exercise intensity during heat stress has been suggested as a behavioral response to maintain homeostasis; however, the relationship between thermophysiological cues and the associated response remains unclear. Awareness of an environmental manipulation may influence anticipatory planning before the start of exercise, making it difficult to isolate the dynamic integration of thermophysiological afferents during exercise itself. The purpose of the present study was to examine the direct real-time relationship between thermophysiological afferents and the behavioral response of voluntary exercise intensity.

We conclude that, while the thermal environment affects physiological responses and voluntary power output while cycling at a constant perceived effort, the behavioral response of voluntary exercise intensity did not depend on a direct response to real-time integration of thermal afferent inputs.