Posted at 11:41h in Publications by Anr3FLoR 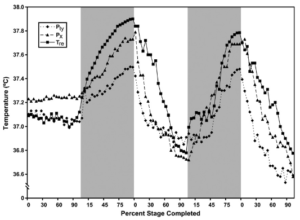 We examined the efficacy of tympanic (T(ty)) and exhaled breath (T(X)) temperatures as indices of rectal temperature (T(re)) by applying heat (condition A) and cold (condition B) in a dynamic A-B-A-B sequence. Fifteen healthy adults (8 men; 7 women; 24.9 +/- 4.6 years) volunteered.

Following a 15 min baseline period, participants entered a water tank maintained at 42 degrees C water temperature and passively rested until their T(re) increased by 0.5 degrees C above baseline. Thereafter, they entered a different water tank maintained at 12 degrees C water temperature until their T(re) decreased by 0.5 degrees C below baseline. This procedure was repeated twice (i.e. A-B-A-B). T(ty) demonstrated moderate response delays to the repetitive changes in thermal balance, whereas T(X) and T(re) responded relatively fast. Both T(ty) and T(X) correlated significantly with T(re) (P < 0.05). Linear regression models were used to predict T(re) based on T(ty) and T(X).

The predicted values from both models correlated significantly with T(re) (P < 0.05) and followed the changes in T(re) during the A-B-A-B thermal protocol. While some mean differences with T(re) were observed (P < 0.05), the 95% limits of agreement were acceptable for both models. It is concluded that the calculated models based on tympanic and exhaled breath temperature are valid indicators of core temperature.